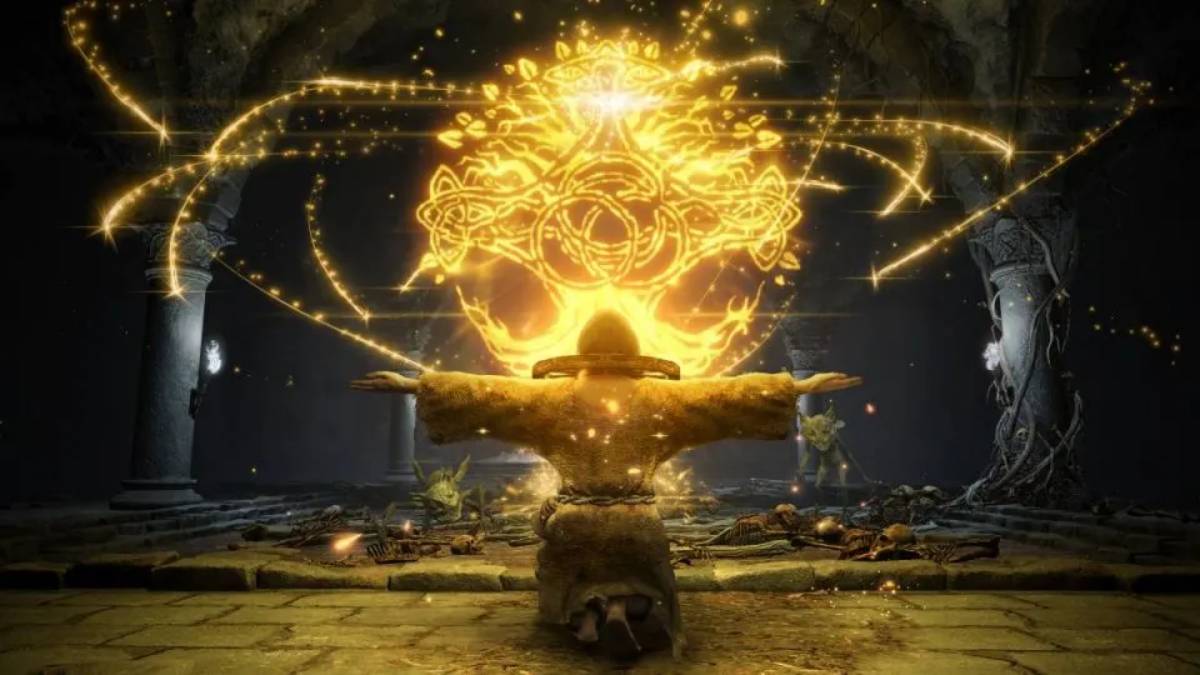 
FromSoftware’s latest game allows for a variety of combat strategies, that include harnessing the power of the Gods. Here are the top Elden Ring Incantations that make leveling up your Faith stat worthwhile.

Regardless of your Class choice, it’s undeniable that some of Elden Ring’s Incantations are too powerful to overlook. Therefore, it’s worth putting some points into Faith so that you can use the spells on this list.

FromSoftware’s games often include many fictional religions and godlike creatures, and Elden Ring is no exception. There’s also sorcery magic, so check out our guide explaining how the two types are different.

So, here are the top Elden Ring Incantations to unleash your godly wrath on the faithless of the Lands Between.

Leveled up the wrong stats and can’t use the best Incantations? Here’s how you can re-spec your character and boost your Faith level immediately!

First of all, let’s cover the top Incantations. Sometimes, the name alone can give you a hint at what they do or whether they’re interesting enough to join your arsenal.

That being said, Elden Ring is an unapologetically vague game at the best of times, so read onwards for a breakdown of each Incantation. Plus, we’ll tell you where to find them!

There are also three legendary Incantations for you to obtain. We’ll cover those, too.

NOTE: Incantations in Elden Ring have different purposes. Some are offensive or defensive, whilst others heal. Therefore, use this list to choose the best Incantations to suit your particular playstyle.

Starting off with an Incantation that everybody should acquire, regardless of character build, we have Erdtree Heal.

This Incantation heals a “vast” amount of HP (sometimes in the thousands), not only for the caster but also for nearby allies. So keep that in mind if you’re fighting alongside summons!

To find Erdtree Heal, you must have defeated Maliketh, Black Blade of Death, and gained access to the alternative version of Leyndell – an ashy ruin. Erdtree Heal will be within the Queen’s Bedchamber.

Next up is a helpful Incantation in the form of Blessing’s Boon. This spell is available to lower-leveled Faith users than Erdtree Heal, but offers similar results.

However, there is one major difference with Blessing’s Boon; It regenerates HP gradually instead of in one sudden buff.

The effect lasts for 90 seconds, restoring 8 HP per second, and can still include allies. In fact, the casting process for Blessing’s Boon can be held before release, allowing friends to close in and gain the buff!

Blessing’s Boon is sold by the tortoise Miriel, Pastor of Vows at the Church of Vows in Eastern Liurnia. It costs 4,000 Runes.

Elden Ring’s tortoise Pope Miriel has gained a cult following online, but here’s what happened when one player slayed him!

Now we’re getting into the more sinister side of Faith-based character builds. Rotten Breath is a truly nasty Incantation.

Its low stat requirement means most users will be able to use it to exhale disgusting toxic breath over your enemies, causing Poison buildup.

Rotten Breath is a Dragon Communion Incantation, so obtaining it is a little more complicated. Here’s our guide explaining how you can learn this powerful Incantation!

Another disgusting Incantation, and the first to require higher Arcane than Faith stats.

Swarm of Flies is fairly self-explanatory: Casting this spell will unleash bloodthirsty insects upon whichever poor soul stands before you.

This Incantation is currently overpowered, so find out where to claim it before FromSoftware nerfs it!

And since it’s a bleed-based Incantation, you’ll want this gear that increases your power when nearby enemies are bleeding!

One of three Incantations used by Crucible Knights around the Lands Between, Tail is extremely effective.

This spell causes a tail to sprout from the caster’s body and sweep the battlefield, plowing through anything within its reach.

It’s worth noting that Tail can be charged before being unleashed, producing a second, larger swiping appendage to really catch your foes by surprise.

If you think it sounds too good to be true, then maybe it is. This Incantation is only obtainable by killing one of the toughest early bosses in Elden Ring.

The Crucible Knight imprisoned in Stormhill Evergaol holds the Tail Incantation, and he’s no joke.

If you’re struggling to kill him, join the club. If you want to bring him down, check out our guide to give you the upper hand!

This Incantation may not be as flashy as Tail, but its power should not be overlooked.

Bloodflame Blade imbues your current weapon with the Bloodflame buff, which as the name suggests, causes both hemorrhaging and burning.

If you think this Incantation would suit your bloodletting Tarnished, follow our guide to find it in Liurnia of the Lakes!

Bloodflame Blade is especially effective on katanas, so Samurai should add it to their build. Here are the best Samurai builds in Elden Ring!

Elden Ring is a Role-Playing Game and a vast one at that. So much so, that it even gives players the chance to roleplay as a superhero… kind of.

Frenzied Burst is one of Elden Ring’s more exciting Incantations, allowing the caster to shoot concentrated beams of fire from their eyes!

Once again, this Incantation can be charged to great effect; 20% more damage dealt, penetration through enemies, and massive damage against shields. Worth the risk, in most situations.

Frenzied Burst is dropped by a Teardrop Scarab in Liurnia of the Lakes, south of the Church of Inhibition. Look for a collection of rats. It’s nearby.

Some players are taking role-playing to extremes. Check out some created characters expertly modeled after actual superheroes… and Samuel L. Jackson!

The following three Incantations are considered legendary within the lore of the game. They may not be better than the spells above, but they are useful in their own right and completionists should collect them!

This Incantation is obtainable fairly early in Elden Ring, but does require exceptionally high Faith stats. Like Tail, it is dropped by an Evergaol boss.

Thankfully, this boss is much easier than the Crucible Knight. Defeat Adan, Thief of Fire and you’ll be gifted the Flame of the Fell God.

Adan’s Evergaol is located in southwest Liurnia, atop of cliff overlooking the water.

The spell launches a fireball through the air, which explodes on contact. Better still, the patch of earth beneath your foes will be set alight for a short time!

Working through the Evergaols of Elden Ring? Here’s how you can defeat another imprisoned boss, Bloodhound Knight Darriwil!

Greyoll’s Roar works in a similar way to other Dragon roar style Incantations, except this spell’s effect is a little more subtle.

The roar doesn’t afflict poison or rot, or any other status effect, but rather debuffs your enemy’s attack power!

However, acquiring this Incantation is no walk in the park. You’ll need to defeat Greyoll herself, the mother of dragons. This enemy is located on the border of Caelid and Dragonbarrow, right beside Fort Faroth.

She is stricken down and can’t attack herself. The problem is her entourage of regular dragons who, despite beginning with half-HP, can overwhelm you with their numbers.

It is quite possible that you may be fighting multiple at once. Because of this, you’ll need to plan ahead. Bleed-based weapons and spells are incredibly useful against dragons, so perhaps grab some other Incantations off this list first!

Once Greyoll is dead, take her heart to the Cathedral of Dragon Communion alter and cash it in for Greyoll’s Roar!

Want to practice killing dragons and make unlimited Runes in the process? This is how you can farm Runes from Elden Ring’s Sleeping Dragon!

Now this is a truly legendary Incantation. Requiring a huge level 50 Faith, only the serious worshippers will be able to use this spell.

Plus, the need for two memory slots ensures that this Incantation will likely be the showstopper in your spellbook. Within the game’s lore, it is the “most ancient” of the Erdtree Incantations.

When cast, a large shooting star will loom overhead. It moves with the player and shoots smaller stars at your enemies.

These smaller stars deal minor damage, but unstoppable posture damage! Then, if the large shooting star makes contact with an enemy, the holy damage will be devastating!

Elden Stars is found in Deeproot Depths, west of the Great Waterfall Crest grace, and inside a cave filled with ants. Don’t miss it!

Lacking the Memory Slots to optimize your magic build? Here’s one way you can easily gain a Memory Stone without risking life and limb!

And there you have it. The top 10 Incantations in Elden Ring! Remember, choose the ones that suit your playstyle best!

Looking for the best weapons to combine with your newly acquired Incantations? Here’s where you can grab the strongest Faith-based weapons in Elden Ring!

Or want to make sure you don’t waste precious runes going over the soft-cap for Faith levels? Here’s all the intel you need to know when to stop enhancing your Faith!