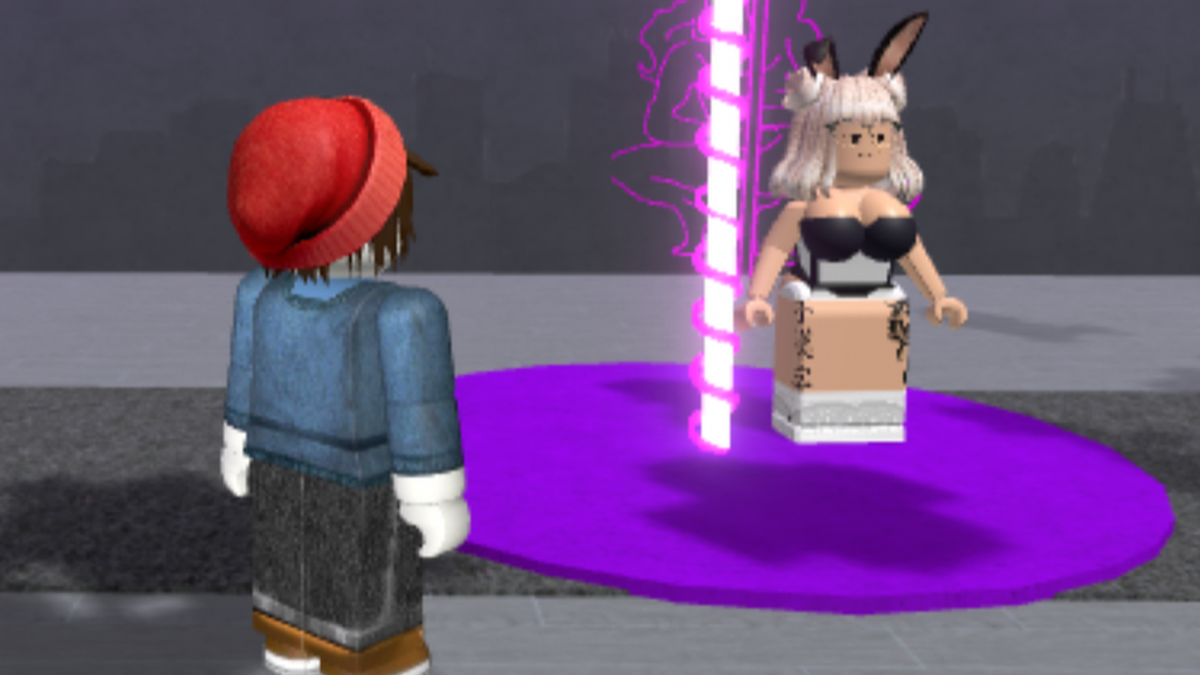 WARNING: THIS ARTICLE CONTAINS TEXT AND IMAGES OF A SEXUAL NATURE.

A naked man, wearing just a dog collar and a lead, is led across the floor by a woman in a bondage outfit.

Two strippers dance next to a bar.

A group has gathered around a couple openly having sex, watching and occasionally commenting.

One man is wearing a Nazi uniform.

This isn’t happening in the real world, it’s taking place on a children’s gaming platform.

Roblox is a huge sprawling world of games which is sometimes described as a kind of primitive metaverse.

It’s one of the most popular children’s games in the world.

The exact figures are a little hazy, but in 2020 Roblox told Bloomberg that two-thirds of all US children between the ages of nine and 12, use the game.

Roblox allows users to create and play games together. It’s a way to connect, in real time, with other people in a digital world.

Players can build games, using the developer tools which the platform provides. Unlike more traditional games, the content is generated by its users. It’s a wildly successful business model, but it also comes with problems.

Roblox sex games are commonly referred to on the platform as “condos”. They’re spaces, generated by users, where people can talk about sex – and where their avatars can have virtual sex. In these games, Roblox’s rules are thrown out of the window.

Roblox accepts it has a problem: “We know there is an extremely small subset of users who deliberately try to break the rules,” a spokesperson told the BBC.

Condo games are usually only live for a short time – often less than an hour – before they are discovered and taken down. Roblox says it is constantly trying to take these games offline – using both manual and automated systems.

“We conduct a safety review of every single image, video, and audio file uploaded to Roblox, using a combination of human and machine detection,” it said.

But some explicit content does slip through the net. It’s a “cat and mouse” issue, said Larry Magid, president of ConnectSafely- a non-profit organisation that raises awareness about child safety online.

“There are people who are going out of their way to game the systems,” he said.

These condos are not games you would stumble on. You would need to actively search for them. But their very existence troubles people like Mr Magid: “Roblox is a platform that is very popular among children, and allows children under 13, so it has a special responsibility to protect its users.”

Particularly worrying is children and adults potentially socialising together in these spaces. Part of the game includes an instant messenger where users can talk to each other – and to everyone else playing the game.

Much of what is written on chats in condos is unprintable on a grown-up news website, let alone a children’s game.

Roblox told the BBC they had developed ‘Parental Control’ tools, “that can be used to restrict who children interact with and which experiences they can access”.

But that assumes that parents are tech-savvy enough to know about these safeguards.

Roblox wanted to emphasise to the BBC that condos are often difficult to find on the platform. But the BBC found inappropriate sexual language in legitimate games too.

According to Dr Liraz Margalit, a digital psychologist who studies behaviour online, people behave differently in the metaverse – just as they do online. She said: “You have the anonymity and you have the disinhibition effect. This platform provides you with the playground to do anything you want.”

The game allows people to meet each other in different spaces – where their avatars can watch sport, attend concerts or do gym classes together.

The changes came after a woman claimed to have suffered a virtual sexual assault on the platform.

Roblox told the BBC: “We have zero tolerance for sexual content or behaviour of any kind, and we take swift action against anyone found to be acting in breach of our Community Standards.”

And a few days after the BBC put its findings to the company, Roblox published a blogpost summarising what it is doing to protect young people.

Companies like Microsoft, Meta and Roblox are currently racing to build metaverses. But there are already signs that they’re struggling to police these virtual worlds.