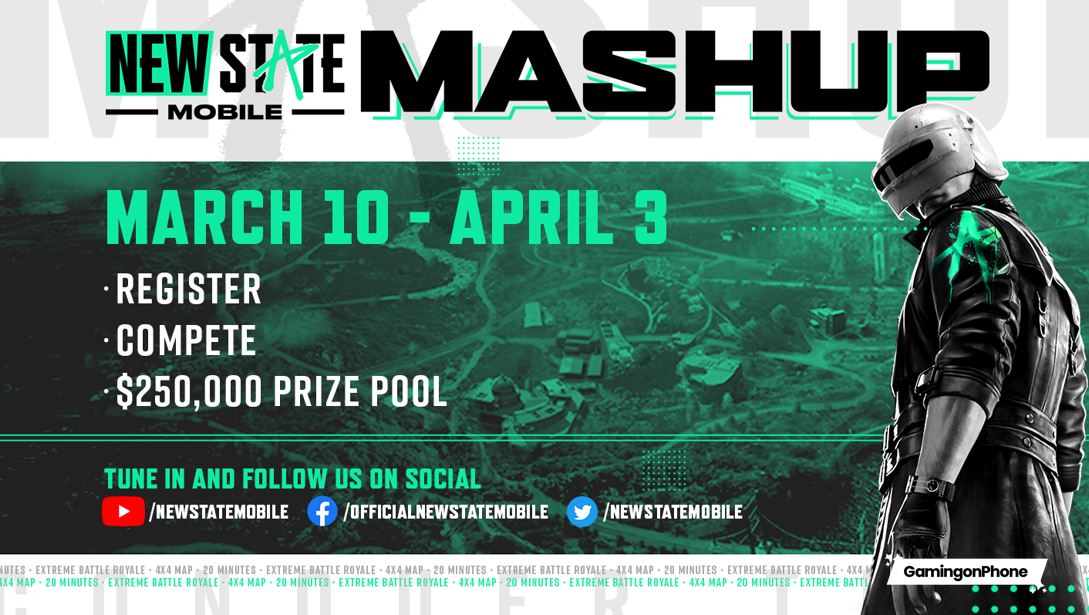 PUBG New State Mobile‘s first tournament – the New State Open Challenge concluded recently across regions. The first tournament of the newly released game received an overwhelming response from gamers. It seems that Krafton wants to keep that momentum going as they are introducing another contest for its eager players. Launching next week is the 2022 New State Mobile Mashup Challenge will run from March 10 to April 3.

However, only players from North America are eligible to participate in PUBG New State’s Mobile Mashup Challenge. This three-week long contest will feature open qualifier tournaments hosted by influencers with the grand finale being held in April, with a prize pool of $250,000. The developers have confirmed that all matches will be played on the BR: Extreme Mode.

Players can expect to see content creators like ChocoTaco, Wynnsanity and NoahfromYoutube host the qualifiers and top performers from each other these matches will qualify for the final. Survivors will receive multiple chances to showcase their skills and try to book a spot in the finals.

The Open Qualifiers will be held on March 11th-13th, 18th-20th, and 25th-27th – There will be three sets of contests, each with a prize pool of $10,000. Up to 128 teams can register to participate in each Open Qualifier. From here, the top three teams from each set will make it to the finals.

From April 1 to April 3 is the penultimate stage of the tournament when The Grand Finale will be held in which a total of 16 teams will battle it out in the end over a $200,000 prize pool. Three teams from the influencer-hosted and nine from the open qualifiers will participate here and four surprise wildcard teams will be added. Additionally, there’s a $5,000 bonus for the overall MVP.

The BR: Extreme Mode is a fast-paced match with 64 players on a smaller map with a 20-minute time limit. Each player begins the match with a P1911 handgun, smoke grenade, and 300 Drone Credits. This mode has been chosen because it gives an adrenaline rush to the players and thrills the viewers. In short, it makes battle royale experience even more exciting and fun.

The points system is consistent across each format and each round will evaluate teams based on the following. In addition, one (1) point will be awarded for each elimination.

How to participate in New State Mobile Mashup Challenge 2022

Players residing in North America can register their team directly by clicking here. Here’s the rulebook for more information.

All the Influencer Tournaments, Open Qualifiers, and the Grand Final will be broadcasted on the official YouTube and Twitch channels. Tune in to catch your favorite team in action!

What are your thoughts about the 2022 New State Mobile Mashup Challenge? Let us know in the comments below.