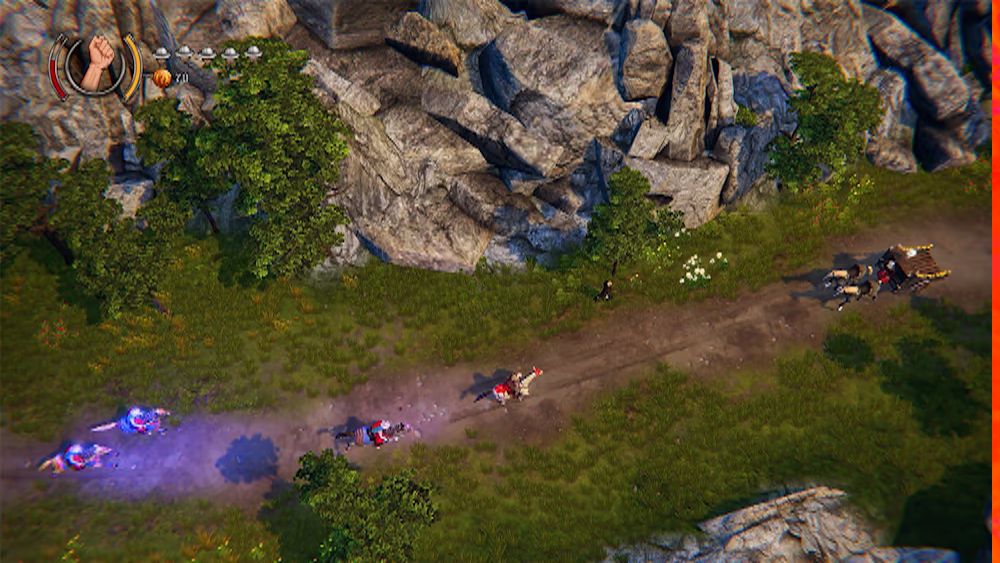 Rustler calls itself a medieval take on the first two Grand Theft Auto games. Now, I’ll admit that I never played either of them. But I’ll say this: if they were this bad, no one would’ve cared enough to stick around for GTAIII. In this alternate universe where Rustler predates GTAII, there’d have been no indication that the folks behind the game had it in them to make such an epochal landmark – though, ironically, Rustler is glitchy enough and all-around lousy enough that it could totally have passed as a predecessor to the abomination of a GTA III collection that was released last year.

As it stands, completely setting aside the GTA question, Rustler just isn’t very good. It’s a top-down action game where nothing works all that well – and not in a glitchy, fun way, but rather in a frustrating, “I need to reload my last save point because I’m stuck” kind of way.

And you will get stuck quite a bit, because the controls are absolutely terrible. Steering your horses is a massive pain, and it’s shockingly easy for them to get stuck behind a tree or on a fence or next to a person. On top of that, the graphics are abysmal (at least in handheld mode), and your character has a weird, shimmery halo around them at all times, which makes it very easy to find yourself next to a tree/fence/person and not even realize it because you can’t see them.

I’ll also note that it’s weird that someone would try to create a GTA-style game and not allow you to simply run over pedestrians. I know that horses aren’t as lethal as cars, but we’re talking about people here. Even someone like me, who’s rarely ever been outside a city, knows that a horse should be able to trample over a person.

Getting back to the controls for a second, I’ll also note that the combat is awful. Whether I was attacking people with my fists, with crossbows, with whatever I could pick up, it was always much harder than it needed to be to simply attack a specific person in whatever direction I was facing.

The game’s humour is also pretty lousy. Even noting that a lot of GTA’s humour from twenty years ago has aged pretty badly, you can still see that they were aiming for satire. In Rustler, by contrast, it’s just a lot of body grossness and “Yo mama” jokes. I mean, those can be funny in small doses, but it’s not enough for a whole game. There are some mildly amusing bits and pieces here, like parking signs for horses and medieval cops, but for the most part, they’re drowned out by fart jokes.

It’s entirely possible that Rustler is a lot better if you’ve played the original GTA games. But I doubt it. Between the lousy controls, the ugly graphics, and the all-around annoying gameplay, there’s really nothing here worthwhile.

Modus Games provided us with a Rustler Switch code for review purposes.