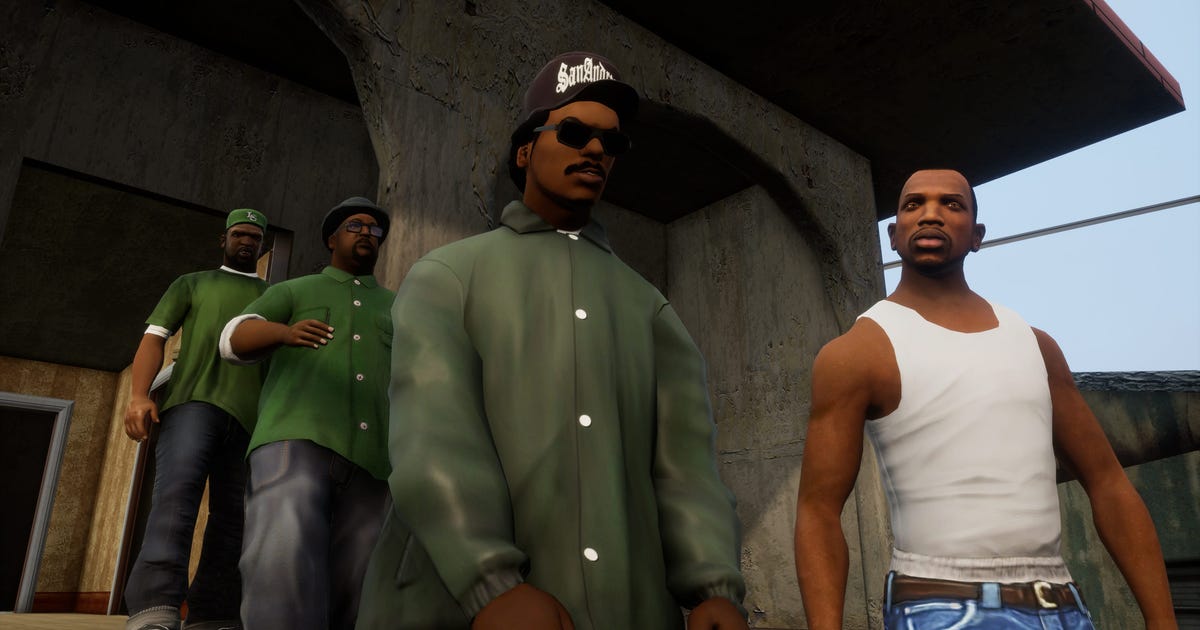 
Grand Theft Auto: The Trilogy – The Definitive Edition hit consoles and PCs last week, and the reception from fans hasn’t been great. Publisher Rockstar Games apologized for the state of the game and is working on making amends.

The remaster of the first 3D GTA games — GTA 3, GTA: Vice City and GTA: San Andreas — was meant to offer fans of the series a way to relive memories of the older games with improved visuals. Instead, many who played the remaster have encountered a growing list of problems, leading to the game receiving an abysmal user rating on Metacritic. Some fans are asking Rockstar for refunds.

Get the CNET Windows Report newsletter

Get smarter with the latest Microsoft news, reviews and advice on Windows PCs. Delivered Wednesdays.

Rockstar released a statement Friday apologizing for how the game turned out.

“The updated versions of these classic games did not launch in a state that meets our own standards of quality, or the standards our fans have come to expect,” the publisher said.

The company plans on fixing the GTA Trilogy issues with future updates until the game reaches “the level of quality that they deserve to be.” Rockstar also says those who purchased the remaster on PC will receive the classic version of GTA 3, GTA: Vice City and GTA: San Andreas for free via the Rockstar Store in the near future.  The three older games were removed from the company’s storefront prior to the release of GTA Trilogy.

Here are some of the problems (so far) with the GTA Trilogy remaster.

What’s are some of the problems with GTA Trilogy?

When publisher Rockstar Games first revealed GTA Trilogy, there was a swell of excitement from fans. Characters looked better, explosions were bigger and the worlds looked more alive. That hype drained quickly when people actually played the games.

One major complaint among players is the confusing visual changes. The assumption is that AI software was used in order to obtain better-looking graphics and while it improved certain visuals, it also made for some awkward-looking characters.

There’s also a weird glitch in GTA San Andreas. If you’re in first-person mode while riding a bike, it shows a super close-up of CJ’s face instead of just a first-person view of the road.

Glitches aren’t just limited to the game’s graphics. Across all three games are holes in the ground where players and vehicles can get stuck, cutscenes that get interrupted by non-playable characters and strange collision physics. There’s also a disorienting rain effect that makes it hard to even see the actual game.

What happened with the PC version?

A day after its release, the PC version of GTA Trilogy was removed from the Rockstar Games Launcher. It was then added back into the launcher two days later.

Rockstar didn’t provide a reason for this 48-hour removal, but there were two big items uncovered in the PC files for the game.

Dataminers apparently discovered the “holy grail” of developer notes for the game not long after it launched. This included codes and assets that weren’t used in the game and notes from the original development team. One data miner confirmed these files were removed when the PC version was put back on the launcher.

Another discovery was the inclusion of the “Hot Coffee” files. When GTA San Andreas came out on PC in 2005, players found data for an unused sex mini-game, leading to a swirl of controversy for Rockstar. It was eventually removed from the game in 2008. As for the files in GTA Trilogy, it’s unclear if they were also removed when Rockstar made the PC version available again.

GTA Trilogy marks the first time the 3D GTA games were made available on a Nintendo console. Unfortunately, it’s not a great port.

The Switch version has the problems from the other versions compounded with performance issues and degraded visuals in order to work on the lower-powered Nintendo console. This includes an unsteady frame rate, longer loading times and downgraded graphics compared to the PS5, PC and Xbox Series versions.

Will these issues be fixed?

Grove Street Games, the studio that ported the GTA games to mobile phones, was behind the GTA Trilogy. The company’s CEO Thomas Williamson tweeted there would be updates coming in the future, although he did not provide specifics.

On Friday, Rockstar released a statement apologizing for GTA Trilogy’s current state. It said an update addressing multiple issues will be available in the coming days with more planned for the future.