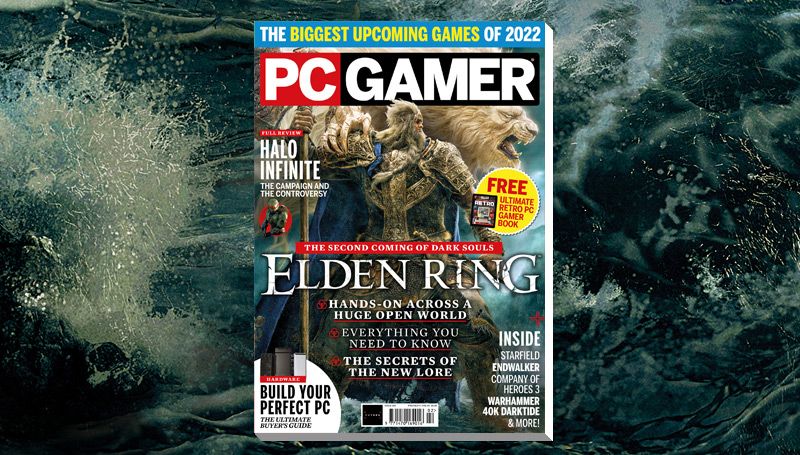 
Happy 2022 gamers! A new year is a time to make new goals and resolutions—our goal is to continue bringing you juicy gaming and hardware news, reviews, and hot takes in PC Gamer magazine. Hopefully, your goal is to read as much of it as your eyeballs can take!

This month’s issue is a right cracker: we’ve been parrying and dodge-rolling our way around FromSoftware’s upcoming action-RPG Elden Ring, the grand open world follow-up to Dark Souls. Not only is there a fantastic hands-on preview, but we’ve picked up loads of knowledge and shared everything you need to know about the game and its lore before it arrives on February 25.

As if that wasn’t enough, we’ve got the verdict on floaty space shooter Halo Infinite along with our review on Final Fantasy 14: Endwalker, the MMO’s latest expansion that wraps up a decade-long story. We’ve also checked out the likes of Chorus, Jurassic World Evolution 2, Solar Ash, Farming Simulator 22, and Fights in Tight Spaces.

With a packed year of PC gaming ahead of us, we’ve compiled a list of the biggest and coolest releases landing throughout the year so that you don’t miss out on 2022’s hottest games. We’ve also chatted to some veteran developers and gotten them to spill the tea on invisibility in videogames, and charted CD Projekt Red’s rise and stumble over the last several years.

Our hardware team has been hard at work putting a range of CPU coolers through their paces to find the best one for your rig, plus an in-depth review of the Intel Core i5 12600k CPU. If you’ve got some Christmas cash to burn, we’ve also put together a handy buyer’s guide to help you put together a gaming rig no matter your budget.

This month’s freebie is the Ultimate Retro PC Gamer Collection, peering into our old CRTs as we look at the games and hardware that shaped PC gaming as we know it today.

Issue 366 is on shelves now and available on all your digital devices from the App Store and Zinio. You can also order directly from Magazines Direct or purchase a subscription to save yourself some cash, receive monthly deliveries, and nab some badass subscriber-exclusive covers. Here’s what this month’s looks like: