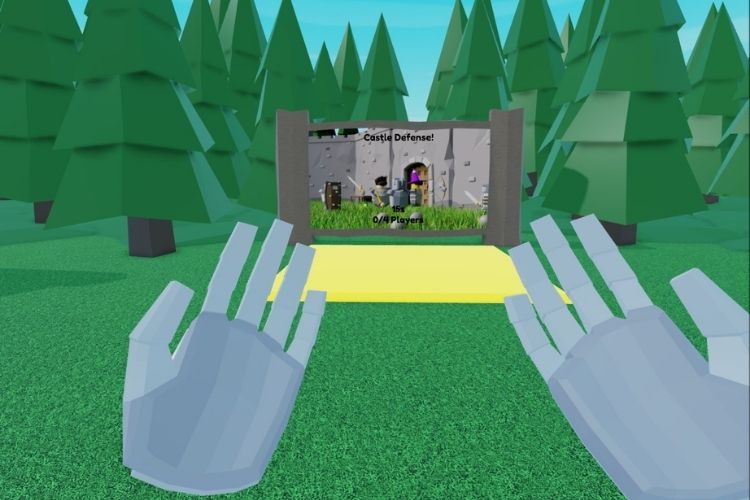 If there’s one thing we know is that Roblox continues to be an amazing platform for a variety of games. No matter if you’re into the best Roblox horror games or any other genre, there’s something for everyone. But did you know you can even play Roblox in virtual reality? That’s right! If you have recently set up your Quest 2, and you want to combine your love for Roblox with VR, you’re in the right place. Strap on your headset and keep reading as I’ll show you to play Roblox on your Oculus Quest 2.

While playing Roblox on the Oculus Quest 2 itself is easy enough, there are still some things you require. However, if you already know what they are, use the table below to jump to the process.

Can You Play Roblox on the Oculus Quest 2?

While there is no official way to play Roblox on the Oculus Quest 2, there’s a very easy alternative. If you have set up a virtual desktop on Quest 2, you already know about Oculus Link. Meta’s official software for the Oculus Quest 2, this software allows Quest 2 users to connect their PC to their Quest 2 and play games on the latter. So essentially, Roblox will run on your PC and will be streamed to the Oculus Quest 2’s display. Users can do this hooked up through wires or completely wirelessly.

Requirements to Play Roblox on the Quest 2 Before You Begin

Continuing the above point, if you’re an Oculus Quest 2 user, there are some things you will need before we begin. Have a look at the list below and get set up.

The first and foremost requirement is naturally a virtual reality-ready computer. Since the games themselves will run on the PC, you will require a PC that can play games and stream at the same time without getting choked up. If you’re unsure about your machine being capable, check out these official Oculus Link PC Requirements (website) to get a better idea.

Oculus Link is the primary software we will be using to play Roblox on the Oculus Quest 2. While I won’t be detailing how to set it up here, you can learn that by heading over to our guide on playing Steam games on the Quest 2. And remember, if you set up the wireless way, do turn on Airlink on both your PC and the headset using the same guide. Once you’re done, come back to this guide and keep reading.

Playing Roblox games requires a small installation of the Roblox player on your PC. If you’re a first-time Roblox user, simply head on over to any Roblox Game and press the green play button. This will prompt you to install the Roblox player and once done, you’re all set. Veteran Roblox gamers can ignore this step.

Since we will be running Roblox in virtual reality, you will require a Roblox game that can actually run in VR. Make sure the game you choose is VR and Quest 2 ready. You can easily search for VR games by typing the keyword on Roblox’s search.

As always, playing any type of game on your Oculus Quest 2 will use up its battery. Be sure to charge up your headset fully before we begin or you’ll find yourself taking it off soon.

How to Enable Unknown Sources on Oculus Link

Since Roblox does not officially appear on the Oculus Store listing, it’s not reviewed by the Oculus team. While this does not mean anything bad, you will need to go through an extra step to make sure Roblox runs on your Quest 2 without problems. Assuming you’ve already set Oculus Link up, follow the steps below to allow Roblox to pass through.

1. Open the Oculus Link app on your PC.

2. From the left sidebar, find and click on the Settings button.

3. Click on the General tab to open up its settings.

4. Toggle on the Unknown Sources button and you’re done.

And that’s it! As mentioned above, don’t worry about viruses or any other problems since Roblox is perfectly safe to use on your Oculus Quest 2.

Note: While Roblox is safe to run on your Oculus Quest 2, make sure that you use the ‘Unknown Sources’ toggle only with apps that are trustworthy.

How to Play Roblox on the Quest 2

All done with the requirements and ready to start playing? Make sure the game you’ve picked is VR-ready, keep your headset handy and let’s do this. Follow the steps below and play Roblox on your Oculus Quest 2.

1. Depending on your sitting or standing position, set up your Oculus Quest 2 Guardian Boundary.

2. If not done already, open the Oculus app on your PC and launch Airlink on Quest 2. If you’re going wireless make sure your PC and Quest 2 are on the same Wi-Fi network.

3. On your PC or Oculus Link’s Desktop mode, click the Play button for the Roblox VR Game you want to try out.

4. Grant Roblox permission to launch on your browser. If you want, you also check the Always Allow box to make sure you don’t have to do this again.

5. Put on your headset and look around. You’re now playing your Roblox game on Quest 2. Like other games, your controllers act like your hands so move them around and enjoy playing.

Why Can’t I Play Roblox in VR?

If Roblox did not launch on the Quest 2, there could a variety of reasons for it. Check out the following possible solutions to fix the problem.

Like I mentioned before, the Roblox world you choose needs to have support for virtual reality. You cannot just launch any Roblox game and have it convert to the Quest 2. Make sure the Roblox game you’re launching has been made for VR and supports the Oculus Quest 2. If you cannot find any, check out Clashers VR for a good Roblox Quest 2 game.

2. You Have an Old Version of Roblox

If you haven’t updated your Roblox player in some time, chances are you’re running an outdated version of it. An old version might cause compatibility problems thereby causing problems in VR. Make sure you have the latest Roblox client before you proceed. You can learn how to do that through the official instructions.

If Roblox still refuses to launch in VR, Steam might be able to help. SteamVR is the company’s platform for playing virtual reality games on a variety of headsets. Since SteamVR has wide compatibility with games, it might help. Download and install SteamVR (Free) and launch it. Then launch Roblox on your browser and it should run effortlessly.

How to Play Roblox on Oculus Quest 2

So that’s how you play Roblox on the Oculus Quest 2. Hopefully, the game is running perfectly well on your Quest 2, but if you’re encountering issues, make sure you go through the troubleshooting steps mentioned above. So, which Roblox VR games are you going to play on your Quest 2? Let us know in the comments. Meanwhile, if you’re enjoying Roblox VR, you should also check out Minecraft VR on Oculus Quest 2.