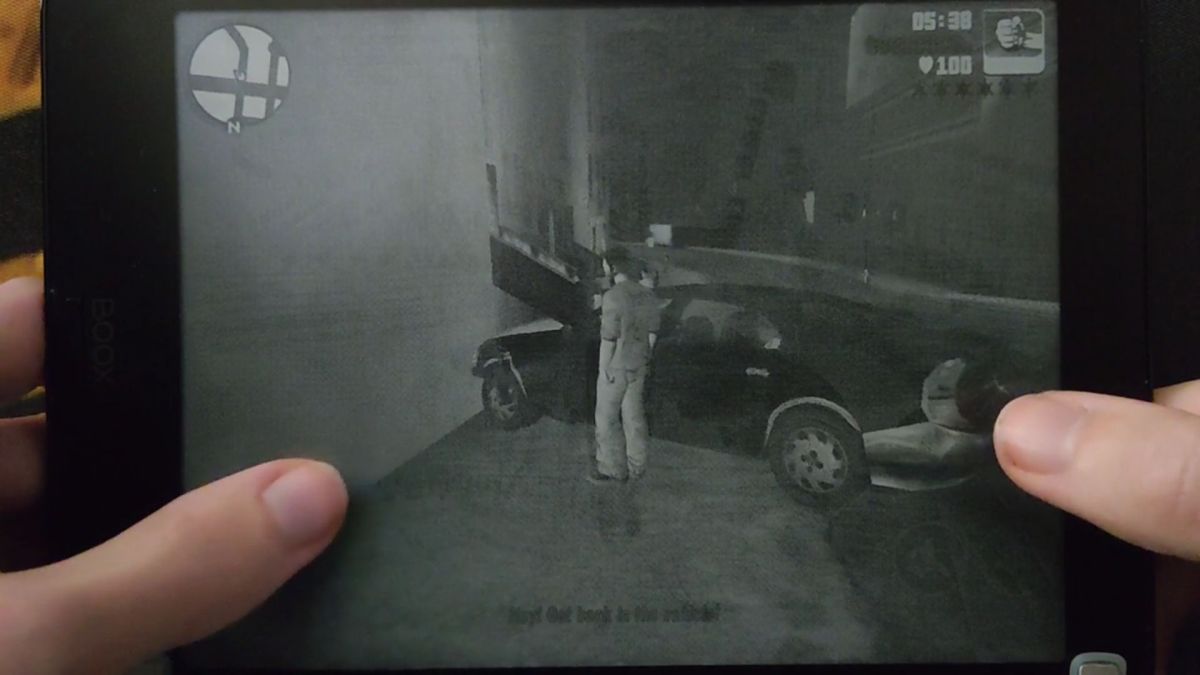 
Porting video games to devices they were never meant to be played on is a long and storied tradition. People have been playing Doom on smart fridges, cameras, and Twitter for years, so it’s only right that other titles make their way onto non-gaming household tech.

One Reddit user has set his sights on the humble ereader as the next unexpected gaming platform, showing it’s possible to play Halo Infinite, GTA 3, Star Wars: Knights of the Old Republic, and other classics on a greyscale, E Ink screen.

Achilleswing, the Reddit user and apparent ereader aficionado in question, booted up a multiplayer match of Halo Infinite on their ebook reader of choice, demonstrating just what the device can do. As you’d expect, it’s not the smoothest of experiences, suffering from an extremely low refresh rate, lots of image ghosting, and constant stuttering, but it’s definitely Halo Infinite being played on a device meant for reading books.

GTA 3 is noticeably better. Its simpler graphics let it run much more smoothly, and the game’s just about playable. It’s certainly good enough to let you run around its greyscale open world and cause some carnage.

They’ve also booted up Star War: Knights of the Old Republic, and suggested its turn-based combat, slow dialogue system, and high contrast color palette makes it particularly well-suited to being played on an ebook reader.

Achilleswing has also tested out The Elder Scrolls II: Daggerfall, Morrowind, Pokémon Crystal, and Paper Mario on the device. They’ve even set up their own subreddit to share clips of each game in action.

As for how they’ve managed to play the games on their ebook reader, Achilleswing has a few tricks up their sleeve. They use an Onyx Boox Nova Pro, an Android ereader that can support the Google Play Store after a little tweaking in its settings menu. Add the Google Play Store app, and you’ll be able to download the Android ports of several games straight to your ereader, including GTA 3 and Star Wars: Knights of the Old Republic.

To run Halo Infinite, Achilleswing says they downloaded the Xbox Game Pass Android app and played the game remotely by connecting to an Xbox One.

He emphasizes that his Boox Nova Pro is a fairly inexpensive model with low hardware specs in comparison to many ereaders on the market. If your device supports a high refresh rate and is capable of downloading the Google Play app, you should be able to hook up a few games of your own.

There’s little reason why you’d want to run any of these games through an ereader. Seeing a Spartan jump up and down, or a Jedi ignite their lightsaber on an inky greyscale screen is fairly amusing, but doesn’t serve much purpose. You’d be better off running the games through an Android phone or tablet, as their apps were originally designed for.

But Achilleswing’s efforts are a firm reminder that hardware enthusiasts will always enjoy porting video games to places they don’t belong. A pregnancy test isn’t a great place to enjoy the high-octane first-person shooting of Doom, but that doesn’t mean it’s not weirdly satisfying to see it run the game.

Achilleswing’s subreddit not only acts as a place for them to share their ebook gaming habits but also to invite others to join them. Although ereaders won’t be the next must-have gaming platform, some enthusiasts will likely pick up the trend.

Of course, if you’d rather not remove all the color from Halo Infinite, you can grab an Xbox Series S below, instead.