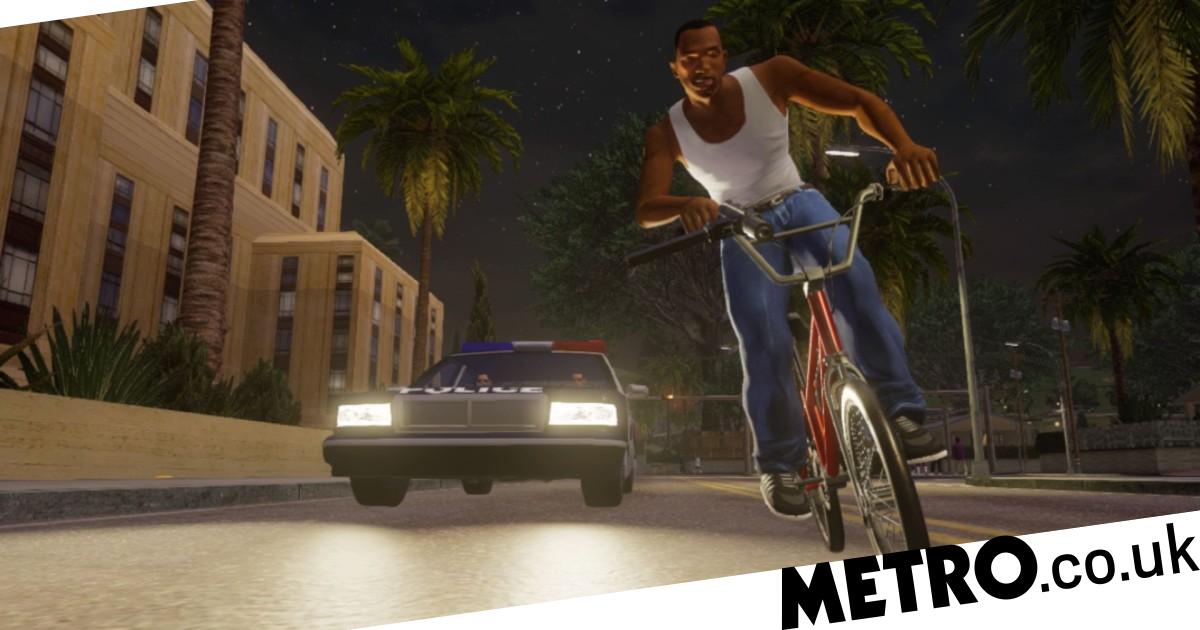 
The Thursday Inbox asks if Guardian Heroes and Nex Machina are perfect games, as a reader is bemused by the Intellivision Amico controversy.

Best of three
I have no idea why Rockstar is being weird about the reveal/launch of GTA: The Trilogy (why do the screenshots this week look 10 times better than last week?) but I’m weak and I’ve already given in to a pre-order. I wouldn’t normally but I figure the worst that could go wrong is bugs, since I obviously know what the games are, and those can be fixed. Even though Rockstar don’t usually have them anyway.

The bigger question I’m wondering, ahead of playing it, is which of the three games is going to stand up the best? I haven’t played any of them in a long, long while and while in my head San Andreas is the best one, I remember it being almost ruined by bad performance, which makes judging what’s underneath actually kind of difficult.

Vice City I always remember as being the weakest, because of the more boring city and all the super obvious steals from Scarface. Everyone remembers the amazing soundtrack but even at the time I remember thinking it was the worst. GTA 3 has the problem that it doesn’t have a proper protagonist, which I think is going to seem weird today, but I’m curious to see how the world design holds up.

I really have no idea, which I think is going to be the appeal for a lot of people: basically rediscovering the games all over again and seeing what still works and what doesn’t.
Jesse

You know the kind
Just wanted to see if GameCentral had an opinion on the drama currently unfolding with the Intellivision Amico? Some of the actions from the company are highly questionable such as releasing so called physical products (actually just RFID Cards in a cardboard box) well before the console is being released, receiving technology innovation awards for a console not even finished.

And to top it all off the CEO Tommy Tallerico has been ranting to gaming forums on Reddit, Atariage, and YouTube calling gamers ‘haters’ and gaming racists if they point out anything negative towards the Amico. In all the years in gaming I have never seen anything like it.
SlimsyWolf82241 (gamertag)/Burkehare01 (PSN ID)

GC: Well, maybe not from a CEO. But the behaviour seems normal for a certain type of gamer.

Critical manipulation
I genuinely do not understand the hostility towards publishers who do not release early review copies. They have no obligation to do this. If you have concerns about a game, wait until after its release and reviews will start filtering in.

It boils down to impatient gamers stomping their feet and wanting to know everything about a game before its release. Relax, for goodness sake. Or stop pre-ordering based on hype and expectation. Then publishers will have to change tact.
James
PS: On another note, the racing on Circuit Superstars is considerably more satisfying than Forza Horizon 5. Will GameCentral be reviewing this? Apologies if you already have.

GC: You don’t understand why people would be angry at publishers trying to manipulate aggregate review scores at launch? We have never heard of Circuit Superstars before, but it seems to be a top-down racer.

Time for a JRPG
Somewhat late with last week’s Hot Topic but I would like to chuck my oar in for Shin Megami Tensei 5, which doesn’t seem to getting much coverage in the Inbox of late. The possibility of a Persona 5 style breakthrough for the series seems to get further away each day. I’ve always loved a Japanese role-player over the winter, they fill me with the nostalgic warmsies of being a child in the 90s alternating between watching Saturday morning cartoons and playing the epic quests of Final Fantasy while it chucks it down outside.

The trailers are impressive and the large number of positive reviews on Metacritic already have convinced me this will be the best new game in the genre on Switch since the charming (if conservative) Dragon Quest 11S some years ago. The game appears to be a ‘greatest hits’ collection of the series, if not even a remake of Shin Megami Tensei 3: Lucifer’s Call (one of the best of that PlayStation 2 era) so can’t wait. In fact, it does seem like Atlus have done a Dragon Quest 11 on it.

As for the Joystick Awards best ever… I think there’s an easy answer and that is Tetris. In 1,000 years time when we’re all long dead, people will still be playing Tetris, unchanged. It’s the gaming equivalent of drawing pictures, reading a book or listening to music. It taps into the parts of the human brain that are fundamental to what kind of activity gaming is and define it. So it kind of has to be the best.
Marc

Battery powered
Just seen recently that the PlayStation 5 and 4 have had updates to make it still possible to play games on them when the battery dies in them, but Sony could do to fix the same problem with PlayStation 3s before the inevitability of switching off the servers in years to come.

My PlayStation 3 allows me to play my single-player games only if I am online because my battery has died in my PlayStation 3 and I can connect to the internet so I can play those games. If I am not online the games will not start.
Andrew J.
PS: The free game on Epic Store from 4pm on Thursday 11th November is also free on Steam, as it is a free-to-play game called Rogue Company. Also, Assassin’s Creed Chronicles Trilogy is free on PC on Ubisoft Connect until Friday 12th November.
PPS: Manifold Garden is on sale at £8.99 on PSN Store currently, it looks very visually impressive from the screenshots and videos I have seen.

Room for improvement
You’ve said that Advance Wars is a perfect game and I’m here… to not debate it in the slightest but what others do you regard as essentially perfect?

I used to think Gunstar Heroes was but I haven’t played it for a fair few years. I’d certainly say Nex Machina is though. Other than having more levels I can’t find a single fault with it (which is then a fault thus making in not perfect, but you get my point).
Andee

GC: Gunstar Heroes is a great game but in terms of performance it was always pretty bad. We’d agree that Nex Machina is close to perfect, although it could do with better art design and presentation – not to mention more stages.

Another franchise that I am surprised isn’t in there is Metroid or Castlevania, I would include Super Metroid as it seems more significant. The games have their own genre, with so many games in the Metroidvania mould.

Pole position
So Forza Horizon 5 is off to a flying start, hurtling towards 5 million players in its first week. It has 720,000 peak concurrents, which is an impressive launch for any game, even more so a racing game – but it seems this entry has gotten a lot more attention. Forza Horizon has been consistently high quality since the first game, but Forza Horizon 5 has got the attention of people who normally don’t play racing games as well as long-term fans.

I’m loving it, personally, and I think Playground Games deserve props for not only making a stunning looking game that’s every bit as good as its predecessors, but making a number of changes such as progression feeling much more rewarding and just lots of improvements to how the overall structure of the game works. This is coupled with fun new event types, more social features such as the car gifting in the barn finds, and the tweaks made to the handling.

Also, the cars’ audio is top notch with a lot more nuances in how different cars sound. I think they could have easily copy and pasted the last game into Mexico and called it a day, like we see with a lot of sports titles, cough cough FIFA… err, EA Sports Soccer Patch 22. They’re at the top of the racing genre with nothing else coming close and they still make the game better in all these ways.

My only problem so far, and I’ve only played one race so far, is online. They’ve made it very casual, you start invisible and aee invisible for the whole of the first lap. It seems you can’t hit anyone and in subsequent laps you turn invisible again if you so much as touch another player’s car or crash. I understand why they’ve done this, because racing games are full of people who ram each other off the road online, but a bit of contact is racing and all that. It takes away a lot of the tension trying not to hit other cars.

Forza Motorsport 7 solved these issues by adding hardcore playlists to multiplayer, where people would get a penalty if they had heavy contact with another player, cut corners or exceeded track limits. They also added qualifying. I think they should add something similar to Forza Horizon as well, it’s fine having the more casual settings for casual fans but those of us that want it to be a bit more meaty can play on hardcore with penalties and have one lap qualifying with a flying start before each race.
Big Angry Dad82 (gamertag)

GC: Game Pass obviously has a lot to do with those elevated player numbers.

Inbox also-rans
Great review of the Elden Ring demo, GC. I didn’t sign up for it in time but if it’s the whole start of the game I’m actually okay with that as I’d rather go into the final thing blind and just let myself sink in. February here I come!
Hoss

I thought that Fallout 5 Reader’s Feature was a bit over the top when I first read it and now it seems he might actually have underplayed it! Won’t Todd Howard be in his 60s by the time he starts work on it? Why not give it to another developer now and he can still have some control over it.
Zeus

This week’s Hot Topic
The subject for this weekend’s Inbox was suggested by reader Fellows, who asks what is your favourite boss battle of the modern era?

Which game from the PlayStation 3, 4, or 5 era have you enjoyed the most and why? How do they compare to older style boss battles and what do you think of the current standard of boss fights – especially those from Western developers, who traditionally aren’t as good at them?