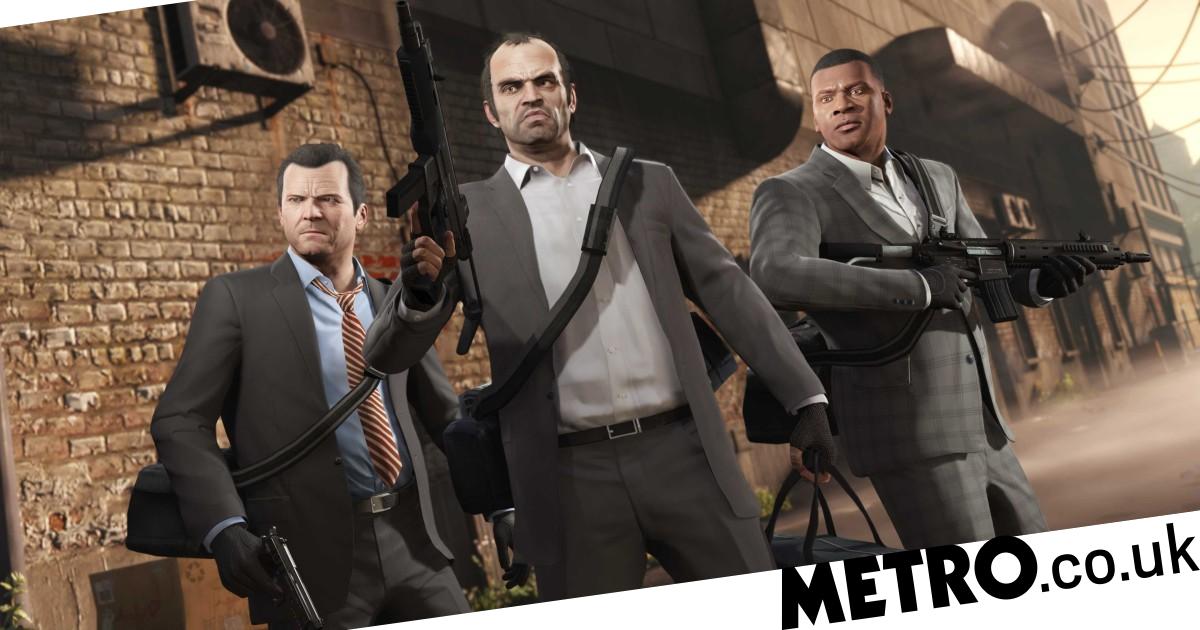 Out now
So GTA 5 is out on PS5 today but as far as I know (and it’s difficult to sure, which is crazy) it doesn’t do anything different to the original? There’s no new story content, no new areas on the map – just a few new cars and customisation options? If that’s the case what on earth took so long?

You’ve got your expected performance and fidelity graphical options, which any old upgrade gets, and that’s it? Ray-tracing, motion blur, some changes to the menus… that’s literally all that seems to be on offer. I guess maybe they’re planning to add some more stuff in on DLC but there doesn’t seem to be anything planned for story mode and either way that doesn’t encourage you to buy it this week.

Maybe it’s Dan Houser leaving but Rockstar seems to have gone massively downhill lately. First it was the remasters of GTA 3 and now this, both of which they refused to talk about beforehand and just suddenly released, with very little fanfare. I don’t know if it’ll be a review exactly, if it’s the same game, but will GC be covering the new versions at all?
Luster

GC: We’ll try and get something up ASAP, but review copies only arrived yesterday.

Really that popular
Is Gran Turismo really that popular? It’s never been a game I’d ever get after the first one I had on PS1. I actually find racing games harder than the Dark Souls games. DiRT Rally 2 I think it was, made me buy a steering wheel just so I had enough control to get through the levels. I never left second gear and when I did I crashed out every time.

Anyway, I think my point was that car games like Gran Turismo are really only enjoyed by proper gearheads who enjoy the mundanity of dialling in gears and suspension setups, etc. Not for most people I’d think so it is a very niche market assuming I’m using niche correctly.
Bobwallett

GC: It’s Sony’s most successful game brand, at over 85 million copies sold. It’d be even more if it was as popular in the US as it is in Europe and Japan.

Free demo but not bug free
I’ve been really enjoying the five hour Cyberpunk 2077 trial so far. Its dystopian/utopian (depending on who you ask!) world, whilst not the most reactive, interactive nor polished I’ve experienced in a game, it’s certainly aesthetically sumptuous and intoxicatingly immersive.

The world-building, density of population, and sense of place in Night City is immense, not to mention the fascinating premise of mega corporations running society and supplying the prevalent futuristic body augmentation tech to the masses, and the unprecedented decadence and danger that comes with the territory.

In performance mode the game runs very smoothly, with some adequate driving physics and pretty solid combat mechanics. I’m also finding the main quest line and story quite compelling to advance through a few hours in. The first brain dance mission – the ability to vicariously experience and manipulate another person’s memories – gave me brain fart however. Not the most intuitive game design I’ve come across but it’s some cool ass tech and immediately reminded me of Remember Me. Dontnod your head if you’ve forgotten or never heard of it…

As for the exhaustively documented bugs; I’ve already witnessed some rather amusing instances where the digital denizens merged into one another, one where a woman is inexplicably walking on thin air, and one particularly absent minded driver constantly scraping his car against the crash barriers, but that last one could’ve just been a simulation of a drunk driver! I should emphasise that none of the aforementioned bugs had impinged on my enjoyment levels. Word up.

Definitely filing this under ‘renewed interest’ and plan on purchasing the full game sometime after I’ve finished having my gaming rep tarnished by Elden Ring!
Galvanized Gamer

GC: Who did you ask that said it was a utopia?

Console and a game
I noticed whilst browsing the Web that my local Smyths toy store last Friday actually had six Xbox Series X consoles in stock ready for sale/pick-up.

I also see that Smyths have got a cracking deal on at the moment if anybody wants to purchase a new Xbox Series S console through the Xbox All Access scheme, you get a free £50 Smyths eGift card to spend on anything at Smyths stores or online. This offer is valid until March 31 (so that could be the Lego Star Wars: The Skywalker Saga game for absolutely free!)
Pacemaker (JAH) Smyth

I don’t know what category of speedruns he’s been watching but it might be the high damage he’s seen is because the runner is way over levelled for the boss. One way to make any Soulsborne games much easier is to grind and level up. You can do that to a much greater extent now with the open world nature of Elden Ring, as not only can you level up stats but the open world gives greater earlier access to weapon upgrade materials if you know where to look.

The below speedrunner (spoilers) arrives at Margit at something like level 50 with a +9 weapon. He gets there by not really using any cheats, some skips and glitches though and runes gained legitimately from killing bosses. Most players will probably arrive at Marigt level 16 to 20 with +1 or +2 weapon I would of thought.
Simundo

Risking a pause
I think the only element of the Reader’s Feature on Elden Ring I agreed with, was the idea that a pause could be an option in ‘offline’ mode. Though playing it this way undermines many of the features which require you to be online and you can also just quit (which will autosave), which only takes a couple of seconds.

Choosing not to do something can definitely be a feature. If, for example, you deliberately exclude any saving at all in your game, that would constitute a significant element of the design of the game.

There is a lower difficulty option, and its one that I utilise myself – which is summoning allies to assist you. This is very much the equivalent of a lower difficulty setting, which I find necessary for most bosses. For the open world area patience and caution will serve you best.

Elden Ring and its ilk have carved out a niche for itself in today’s cramped gaming marketplace by following its own set of design rules. It;s not a game for everyone, and that’s fine, but it can’t make much sense for them to deviate too far from that formula as it would risk their existing critical and commercial success.
Matt (he_who_who_runs_away – PSN ID)

Californication
A friend is into Japanese culture, like films and anime, and they are not really big on video games but they have a iPhone and I thought they would like Ace Attorney as it is a visual novel and the style of the game would be something they like from them telling me what they like about Japan and its culture.

Could you recommend the best Ace Attorney game on iOS as a starting point for someone new to the
Ace Attorney series? I’ve played a few on the 3DS but not sure which one to recommend.
Andrew J.

GC: Although they’re still great, most of the Ace Attorney games are heavily Americanised. The least so (ironically because it’s partially set in Victorian Britain) is the recent The Great Ace Attorney Chronicles, but it’s not out on iOS yet in the West. Either way we’d still suggest starting with the original Ace Attorney Trilogy HD collection.

The features I would like to be implemented, in order of priority, are a way of authenticating original discs for previous generation Sony systems, permitting utilisation of foreign region discs, patches incorporating AI upscaling for improved rendering of graphics, cloud-based saves, save states, and digital versions that do not require physical discs.

Also, another feature I would like to see is the option to download and utilise peer-reviewed and approved fan-made translation patches. Compatibility patches might be important for harder to emulate games. The goals being to widen the catalogue available on one system, making it more universal and, of course, more desirable. It may, however, increase the value of the original retro games on optical media from these previous systems.

Of course, people would want an all-in-one do-it-all system that plays every or near enough every PlayStation game that has ever been released. For Sony initial development costs would be great but it would likely result in increased fan loyalty. I know demand is high already but surely to increase this further would do no harm. It is important not to become distant from or alienate your own customers. Simply relying on exclusive games may not be enough given the success of Xbox Game Pass, it will eventually become necessary to do something extra, perhaps a rethink is in order and some catch-up play might be in order. I say there is always room for improvement.

Sometimes I wish Sony had someone like Phil Spencer, who I read had fought for Xbox Game Pass. Since adopting a PC-like architecture as they did with the PlayStation 4 and 5 the situation has not been fully seized and an opportunity to adopt these features, which are available to PC owners already, should be taken. It is shocking you can play PlayStation 1 and 2 and PSP games on an Xbox through dev mode (which costs a small fee itself), yet you can’t play these games on a PlayStation 5 or 4.

Hopefully Sony releasing PlayStation games on the PC is indirectly a hint of what’s to come. To reiterate, I feel Sony don’t have to, but should implement full backwards compatibility to the best of their ability (it’s not as if they are incapable), doing it as well as or better than Microsoft has done with Xbox. Microsoft have already proven the concept across architectures and I would imagine the technology already largely exists for Sony who seem to have forgotten the proof is in the pudding.
Sheel

GC: Why would no one expect full backwards compatibility for PlayStation 3? Has anyone ever said it’s impossible?

Inbox also-rans
Can I say something really controversial? I think Elden Ring is a really great game with no serious flaws. No seriously, can you believe me?!
Gorgon

A State of Play dedicated only to Hogwarts Legacy? Are they trying to put people off from watching these things?
Prince

This week’s Hot Topic
The subject for this weekend’s Inbox was suggested by reader Simey, who asks what is the least favourite part of your favourite game?

Nothing is perfect, so what do you consider to the be the least perfect part of your favourite (or close to it) game? Is it just a minor irritation or something more significant? Is it something like a particular level or area that the game would have been better off without or perhaps a technical or control issue?

Did the issue get resolved in any subsequent sequels? How tolerant are you generally about flaws in otherwise good games, in terms of both playing them and considering them to be true classics?