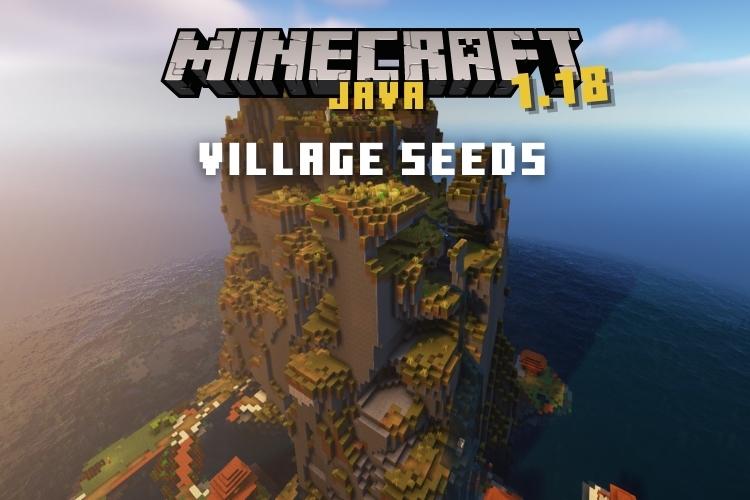 In the war between Minecraft Java vs Bedrock edition, the Java players have almost always had the edge in terms of quality seeds. And as you will see in Minecraft 1.18 village seeds, that situation hasn’t changed much. Our list here has villages with the best loots, rare spawns, and some surprises that you can’t even imagine. However, keep in mind that these seeds only work on the latest Minecraft 1.18 update. If you haven’t updated your game yet, try out the best Minecraft village seeds for 1.17 and earlier versions. They are equally amazing but lack the new terrain generation. Coming back to Minecraft 1.18, we have mentioned the coordinates for key locations to ease out the discovery process in each village seed. So, all you need to do is open your game and dive right in!

We have selected each seed for a unique reason, but the list isn’t ranked in any way. So, you can use the table below to explore them freely as per your interest.

Usually, in the variety of Minecraft seeds lists we have created in the past, I don’t pick a favorite seed. But how can I do that with this one-of-a-kind village seed in Minecraft 1.18? It spawns a full-size village on a narrow mountain with surprising adjustments. You can find villagers and their houses floating in the sea.

These villagers then grow most of their crops in various vertical cave openings on the mountain. And not to forget, villagers keep the majority of their livestock and the iron golem on the top of the mountain. This seed is truly confusing, challenging, and very rare.

I am sure that the majority of players love the new dripstone caves in the Minecraft 1.18 update. But no one loves them as much as this village seed. Located right at our spawn point, it looks like an ordinary taiga village until you go towards its center. That’s where you will find a giant cave opening that leads to a massive dripstone cave.

Cave openings are fairly common these days but what isn’t common is the villager’s house sitting comfortably in it. It doesn’t have a villager most of the time, but you find chest loot and the villager’s cat down here. Just maybe, look out for the cave mobs first.

This Minecraft 1.18 village seed for Java Edition players spawns us next to a seaside plains village, which on first look, feels like it doesn’t fit well with the whole new terrain generation. The village is divided into several floors with cave openings in-between. Here, we have many houses that farmers can’t even access without parkour. However, it has two massive lava pools, a fisherman, and an ironsmith if you plan to speedrun your journey.

Our next seed is interesting in many ways. It spawns us in a massive and beautiful badlands biome next to a mountain. Once you cross that mountain, though, there’s a massive desert awaiting you. Here, you will discover a pillager outpost close to a desert temple, which is also sitting near a desert village.

The locations aren’t exactly next to each other but still closer than you would imagine. If you find one, others are inevitable from being noticed. Then to make things even more interesting, there’s a dripstone cave ravine right in the middle of these three kingdoms.

5. Desert Temple Next to Village

Keeping the conversation centered around deserts, our next seed offers us a desert village with a desert temple on its doorsteps. Not only that, on the other side of the village is a massive badlands mountain. But be careful while looking up because this village is present on top of a huge ravine and cave holes.

Most of them are so deep that you won’t survive the fall even if you use any tactic to avoid fall damage. And to make the matter worse, a few of the villagers’ houses are floating too. So, let’s hope that the loot in the village and temple is worth risking the fall.

At this point, you know how lucky it is to have a village next to a desert temple. But that seems a bit unfair to the other temple in the game. So, this next Minecraft 1.18 seed fixes that by giving us both jungle and desert temples surrounding a desert village. The location isn’t close to our spawn, but you surely shouldn’t mind traveling to get the amazing loot in these temples.

As the name suggests, this seed lands us in a world of frozen ocean and ice spikes. There’s snow everywhere you look, and the chances of survival are slim in such a biome. Fortunately, this seed also has a large snowy village near our spawn point. It has all the resources and more that you need to get started.

But what leads us to add this seed to our list of best Minecraft 1.18 village seeds is the fact that it has underground housing. It has a staircase-like path that leads to a cave opening-cum-ravine under the village. And there you can find more houses, villagers and other village features. Such a weird spawn village is astonishing, but it’s the perfect location to build a snowy base.

A lot is going on in this amazing Minecraft 1.18 village seed. For starters, we spawn in a widely spread savanna village whose savanna biome doesn’t exist beyond the village. Usually, villages are surrounded by biomes to which they belong, but this savanna village has an ocean on 3 sides and plains on one. You can find a cartographer within it, which we know is a great way to get buried treasure maps.

But if dealing with villagers isn’t your strong suit, you can also go to the nearest full-size shipwreck. Honestly, it isn’t really a wreck in any form. Just a drowned ship. And while you are on your way there, try your luck at a large bunch of ocean ruins. Just be sure you know how to make a boat in Minecraft first.

I know that this seed’s name sounds like a movie title, but that’s only because this Minecraft 1.18 village seed is nothing less. Irrespective of their unique features, all Minecraft villages have one thing in common: multiple village houses. Well, not anymore. This seed spawns us near a village with only one house, one farm, and two villagers. And out of convenience, Minecraft has included an iron golem for protection in this remote location.

The final seed on our list of Minecraft 1.18 village seeds is the most beautiful one. It spawns us on an island village that is hard to recreate. Most of the village area is either on the ocean’s edge or floating, making it serene and interesting to explore. Then, on its further edge is a huge frozen ocean with ice spikes in it.

But, what will astound you the most is the giant broken mountain on its back. It is an island with floating and broken chunks all over the place. If you make it to the top, the world will greet you with iconic imagery and some of the most beautiful waterfalls in the game.

Whether it’s for a headstart or the love of villager trading, you can now explore all that in the best Minecraft 1.18 villages with these seeds. Some seeds might seem weird, while others can be the location for your next base. Irrespective of how you use them, these seeds are the tip of the iceberg. If you want to explore further, try out these best Minecraft 1.18 seeds. They are here to give you a true perspective of the new update. For those who are already used to the current world generation, learning about the Minecraft 1.19 update might get you excited for what’s coming. We have also covered the new biomes in Minecraft 1.19 and know that we might get some new villages, with new mobs in Minecraft 1.19, soon. With that said, share what you find exciting in these village seeds in the comments below. Also, if you stumble upon any other cool Minecraft 1.18 village seeds on the Java Edition, share them with our readers in the comments section.